STRESS IS A HOLISTIC ISSUE. 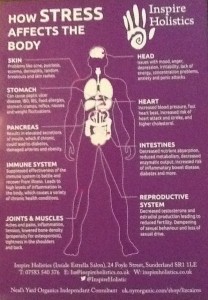 STRESS DOES NOT STAY IN YOUR HEAD!
E.F.T. (Emotional Freedom Technique) can be a powerful tool in helping deal with stress. To find out more call 07583540376 or email liz@inspireholistics.co.uk

Anxiety over a project at work… a marital spat… financial trouble… health problems… the list of potential stressors is endless, but wherever your stress is coming from, it likely starts in your head.

An inkling of worry might soon grow into an avalanche of anxiety. It might keep you up at night, your mind racing with potential “what ifs” and worst-case scenarios. Worse still, if the problem is ongoing, your stressed-out state may become your new normal — extra stress hormones, inflammation, and all.

While beneficial if you’re actually in imminent danger, that heightened state of stress – the one that makes your survival more likely in the event of an attack, for instance – is damaging over time.

The thoughts in your head are only the beginning or, perhaps more aptly, are the wheels that set the harmful mechanism known as chronic stress into motion – and, once spinning, it’s very easy to spiral out of control. As reported in Science News:1

Scientists have since described how a stressed brain triggers rampant hormone release, which leads to imbalanced immunity and long-term physical wear and tear.

Those effects take a toll quite apart from the anxiety and other psychological challenges that stressed individuals deal with day to day.”

Stress: It’s Not Just in Your Head

You know the saying “when it rains, it pours”? This is a good description of chronic stress in your body, because it makes virtually everything harder. The term psychological stress is, in fact, misleading, because no stress is solely psychological… it’s not all in your head.

Let’s say you lose your job or are struggling from post-traumatic stress disorder (PTSD) from abuse you suffered as a child. Excess stress hormones are released, including cortisol, epinephrine, and norepinephrine. Your stress response becomes imbalanced; it’s not shutting off.

Your immune system suffers as a result, and epigenetic changes are rapidly occurring. The stress is triggering systemic low-grade inflammation, and suddenly your blood pressure is up, your asthma is flaring, and you keep getting colds.

That cut on your leg just doesn’t seem to want to heal, and your skin is a mess. You’re having trouble sleeping and, on an emotional level, you feel like you’re nearing burnout.

Stress is very much like a snowball rolling down a mountain, gaining momentum, gaining speed and growing until suddenly it crashes. That crash, unfortunately, is often at the expense of your health.

Police officers clearly face amplified stress on the job, and researchers found they were 21 times more likely to die of a heart attack during an altercation than during routine activities.2 This isn’t entirely surprising until you compare it to heart-attack risk during physical training, which increased only seven fold.

The difference in physical exertion between the two circumstances likely doesn’t account for the increased risk… it’s the level of stress being experienced that sends heart attack risk through the roof.

More heart attacks and other cardiovascular events also occur on Mondays than any other day of the week.3 This “Monday cardiac phenomenon” has been recognized for some time, and has long been believed to be related to work stress.

During moments of high stress, your body releases hormones such as norepinephrine, which the researchers believe can cause the dispersal of bacterial biofilms from the walls of your arteries.4 This dispersal can allow plaque deposits to suddenly break loose, thereby triggering a heart attack.

Stress contributes to heart disease in other ways as well. Besides norepinephrine, your body also releases other stress hormones that prepare your body to either fight or flee. One such stress hormone is cortisol.

When stress becomes chronic, your immune system becomes increasingly desensitized to cortisol, and since inflammation is partly regulated by this hormone, this decreased sensitivity heightens the inflammatory response and allows inflammation to get out of control.5 Chronic inflammation is a hallmark not only of heart disease but many chronic diseases.

Stress Linked to Diabetes and a Dozen Other Serious Consequences

People who grow up in poor socioeconomic conditions have higher levels of inflammatory markers, including interleukin-6 (IL-6) and C-reactive protein (CRP). They’re also twice as likely to develop type 2 diabetes as adults, a risk researchers say is partly due to the elevated inflammation.6

People who suffered child abuse also tend to have higher levels of chronic inflammation, as do those who act as caregivers for loved ones. As reported in Science News:7

“Scientists are now digging deeper, sorting through changes in gene activity that underlie inflammation and receptor shutdown. For example, childhood stress might get embedded in immune cells called macrophages through epigenetic changes — alterations that affect the activity levels of genes without changing the underlying DNA.

Psychologist Gregory Miller of Northwestern University in Evanston, Ill., suggests that these changes can endow the macrophages with pro-inflammatory tendencies that later foster chronic diseases.”

Prolonged stress can also damage your brain cells and make you lose the capacity to remember things. The brain cells of stressed rats are dramatically smaller, especially in the area of their hippocampus, which is the seat of learning and memory.

Stress disrupts your neuroendocrine and immune systems and appears to trigger a degenerative process in your brain that can result in Alzheimer’s disease. Stress-induced weight gain is also real and typically involves an increase in belly fat, which is the most dangerous fat for your body to accumulate, and increases your cardiovascular risk.

Stress alters the way fat is deposited because of the specific hormones and other chemicals your body produces when you’re stressed. Stress clearly affects virtually your whole body, but according to neurobiologist Robert Sapolsky in the documentary Stress: Portrait of a Killer, the following are the most common health conditions that are caused by or worsened by stress:

Digestive problems made Dr. Sapolsky’s list above, which makes sense because the stress response causes a number of detrimental events in your gut, including:

Decreased nutrient absorption
Decreased oxygenation to your gut
As much as four times less blood flow to your digestive system, which leads to decreased metabolism
Decreased enzymatic output in your gut – as much as 20,000-fold!
To put it simply, chronic stress (and other negative emotions like anger, anxiety and sadness) can trigger symptoms and full-blown disease in your gut. As Harvard researchers explain:8

“Psychology combines with physical factors to cause pain and other bowel symptoms. Psychosocial factors influence the actual physiology of the gut, as well as symptoms. In other words, stress (or depression or other psychological factors) can affect movement and contractions of the GI tract, cause inflammation, or make you more susceptible to infection. In addition, research suggests that some people with functional GI disorders perceive pain more acutely than other people do because their brains do not properly regulate pain signals from the GI tract. Stress can make the existing pain seem even worse.”

Interestingly, the connection works both ways, meaning that while stress can cause gut problems, gut problems can also wreak havoc on your emotions. The Harvard researchers continue:

“This connection goes both ways. A troubled intestine can send signals to the brain, just as a troubled brain can send signals to the gut. Therefore, a person’s stomach or intestinal distress can be the cause or the product of anxiety, stress, or depression. That’s because the brain and the gastrointestinal (GI) system are intimately connected — so intimately that they should be viewed as one system.”

Stress is implicated in cancer, not so much as a cause of cancer but because it seems to fuel its growth (or interfere with processes that might otherwise slow it down). For instance, the stress hormones norepinephrine and epinephrine encourage the growth of blood vessels that help prostate tumors to grow. Meanwhile, in women with pelvic growths (who were awaiting tests to see if the growths were cancerous or benign), those with good social support (and presumably therefore less stress) had more immune attack cells directed at the masses, Science News reported.9

Stress has also been shown to increase the likelihood of cancer spreading, or metastasis, which is a major cause of cancer death, by 30-fold.10 Chronic stress also leads to disrupted cortisol signaling. In the case of excess cortisol exposure, some cell receptors become muted, including receptors on immune cells. This is one reason why people under stress are about twice as likely to develop a cold after exposure to a cold virus, compared to non-stressed people. 11,12

Dr. Sapolsky explains that you are more vulnerable to stress if the following factors are true:

You feel like you have no control
You’re not getting any predictive information (how bad the challenge is going to be, how long it will go on, etc.)
You feel you have no way out
You interpret things as getting worse
You have no “shoulder to cry on” (e.g., lack of social affiliation or support)
People at the top of the social pyramid feel a greater sense of control because they are the ones who call the shots, as well as typically having more social connections and resources at their disposal. This results in less stress, which over the long run translates to lower rates of disease. Stress is also closely related to the experience of pleasure, related to the binding of dopamine to pleasure receptors in your brain. People of lower socioeconomic status appear to derive less pleasure from their lives. Perhaps this is why laughter therapy is so effective at relieving stress.13

On the brighter side, positive emotions like happiness, hope, and optimism also prompt changes in your body’s cells, even triggering the release of feel-good brain chemicals. While you can create happiness artificially (and temporarily) by taking drugs or drinking alcohol, for instance, the same endorphin and dopamine high can be achieved via healthy habits like exercise, laughter, hugging and kissing, sex, or bonding with your child. If you’re wondering just how powerful and effective this can be, a 10-second hug a day can lead to biochemical and physiological reactions in your body that can significantly improve your health. According to one study, this includes:14

I was drawn to practising Reiki, having discovered for myself the great benefits of the treatment when I was suffering from anxiety. The difference it made was simply astonishing.

We need to nurture our whole being and this is the belief that draws me to holistic treatments. Invest in your well-being… Learn More

Sign up for all our latest news and special offers.